How to get started with Placker & Trello

Written by Reinder Visser
Updated over a week ago

We'll use an example scrum board in Trello as an example on how you can set up progress and effort/duration tracking in Placker.

The board is a simple scrum layout with four lists for backlog items, items that are in progress, blocked and completed. The board is called 'Development' and shown in the picture below. 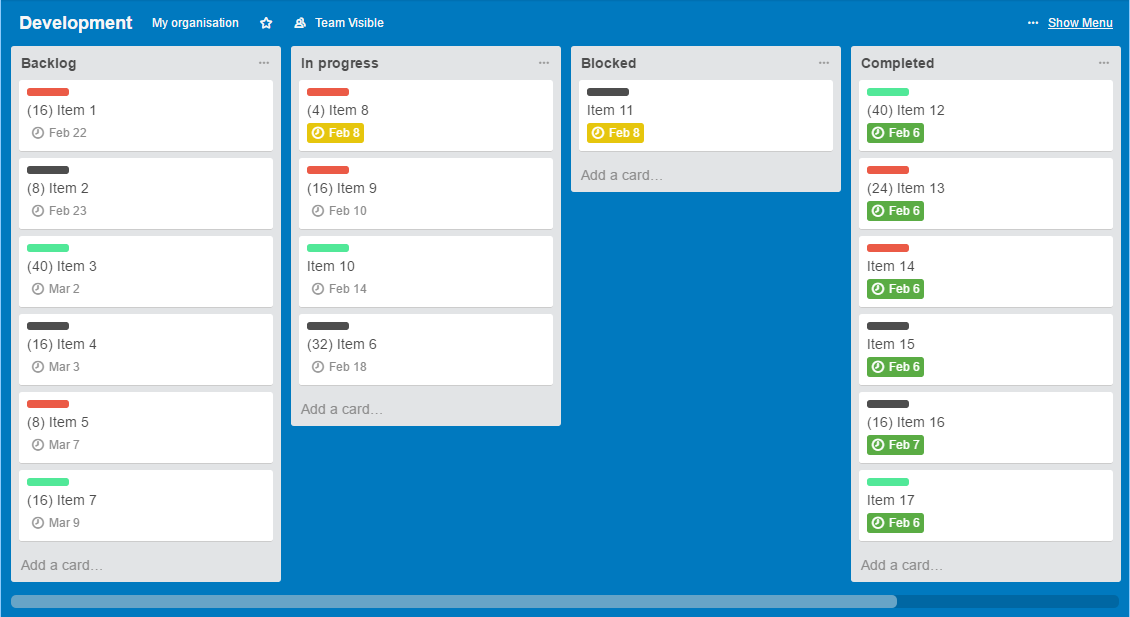 Cards move from 'Backlog' to 'In progress' when they are started, then they move to straight to 'Completed' when they are done or they can be moved to be 'Blocked' list.

Board import and progress tracking

As this board tracks the progress of the cards by moving from list to list, progress tracking of this board will be set to 'by list' during the import of the board.

This way, every time a card moves from list to list, the progress status and progress dates are automatically updated in Placker.

The import process and setting process tracking by list are shown in the below screen recording.

Read more about progress tracking in this article

On the example board, the effort is tracked in this way, so, for instance, a title "(16) task 1" would indicate this card has an effort of 16 hours.

The following steps will set this up:

In the screen recording below you see how to set this up.

When you do this, it will show an effort of 8 hours as 1 day, and an effort of 16 hours as 2 days. (if you like you can set effort by work days instead of hours).

This is how to set it up:

With this configuration, you only need to include the effort in parenthesis in Trello to set it in Placker.

Other articles to get started: